The recently revised manual “Management of City Pigeons in (large) Cities in Germany” (1) is now available in English. The English manual informs interested persons and authorities worldwide about the animal-friendly city pigeon concept that is successfully practiced in several German cities. The English version of the manual is intended to give detailed advice to interested persons and authorities worldwide in order to achieve better living conditions for the animals abroad. 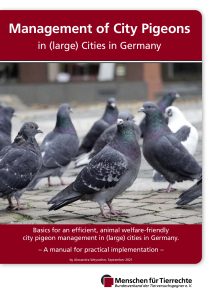 The German practice manual about the population control concept “Management of City Pigeons in (large) Cities in Germany” (1) published by the organization “People for Animal Rights Germany” (Menschen für Tierrechte) was revised 2021. Information about the concept is frequently requested not only from Germany, but also from abroad, because there is no comparable English manual or guideline for an animal-friendly overall concept to regulate city pigeons. Therefore, the manual was now translated into English (2) to give detailed advice to interested persons and authorities worldwide.

City pigeons are not wild animals
City pigeons (Columba livia forma urbana) populate cities worldwide. They are often mistakenly classified as wild animals. But, as they are descendants of racing and breeding pigeons, which at some point escaped or were abandoned, they have to be classified as pets. The domestication of city pigeons began about 5,000 years ago. Still today, abandoned or escaped breeding animals are mingling with flocks of city pigeons. Through this process the animals have certain genetically determined characteristics, which are the main cause of the city pigeon problem, such as increased breeding activity.

Serious Suffering
On the one side the birds are suffering from poor living conditions in cities, such as starvation, diseases, injuries, high mortality rates, especially at high population densities. On the other side there is the problem for people and communities of pollution by pigeon droppings and harassment. Thus, many municipalities impose feeding bans or even kill the animals. Depending on the respective legislation such measures violate animal protection laws, but at least they are unethical and, in any case, unsuitable to reduce pigeon populations in the long term. That is why more and more cities are relying on the successful and animal welfare-friendly „birth control concept“ based on tying the pigeons to pigeon lofts, controlled feeding, and birth control by replacing the eggs with dummies.

Handbook presents overall concept
„Even if the legal status of animal welfare is different in other countries, we hope that for reasons of sustainable population control and the resulting decrease in pollution as well as for ethical reasons, the handbook can lead to better living conditions for the animals abroad“, says Dr. Claudia Gerlach, biologist and specialist at People for Animal Rights. 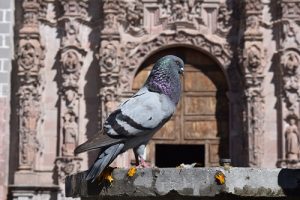 In addition to explaining the causes of the city pigeon problem, the handbook presents the overall concept, its aims and framework requirements. Details for practical implementation, such as supervised dovecotes, their building and equipment, feeding and egg exchange are given. The topics deterrence and feeding ban are important parts of the overall concept to ensure that the animals are tied to the dovecotes and spend most of the time inside. These topics are covered in extra chapters, while special attention is paid to wild nesting cells that should be consequently avoided, e.g., by animal-friendly deterrence measures. Furthermore, an overview of the costs is given with examples for different kinds of dovecotes.

Information about practical implementation
Other chapters inform about different methods to check the effectiveness of the concept, how to increase the chances of success and about the best ways to intervene if problems occur. Accordingly in the appendix “Problem-Solving Approaches for Ongoing Projects” three examples are used to show how implementation problems can be clarified and tackled with the help of the manual. Amongst others the appendix includes a 10-point-checklist for the establishment of supervised dovecotes, the methodical approach to pigeon counting and a clarification about the actual health hazard from city pigeons.
The animal rights organization People for Animal Rights Germany is very grateful that a member translated the 32-page brochure on a voluntary basis.

(2) Management of City Pigeons in (large) Cities in Germany from „People for Animal Rights Germany“, 2021 (PDF)

PDF-download of the press release